After the teaser of my last post, and a comment from Mr Bling on his blog, I unveil the new improved Jackanory
Now that I'm moving all my review type stuff to HappennyWorth I've decided Jackanory is where I'll put examples of what I'm writing. The first chapter of 'Simian Smith' is still there (it doesn't have the changes in it I made after fine suggestions from INJ, but that only counts for a few lines here and there) and I've also decided to post the first chapter of 'The Tale of The Turnip'. TTOTT is in fairly early stages at the moment with only four chapters written and this is very much in first draft stages, but for anyone who wants to read a warts an' all (ie spelling mistakes and grammatical gaffs and an' all) work in progress you might find it interesting. All comments are, as always, greatly appreciated.
Posted by paulhd at 5:49 pm 8 comments:

You won't break me!

Bit of rough day today. Moving boxes went fine and my folks have been doing a spot of decorating for us, but work was an exercise in pain. I didn't realise practically every aspect of the place was under warranty, but it must be as they all seemed to expire today accompanied by many puffs of smoke. Computers crashing, tills jamming, orders going weird and staff sick, and that wasn't half of it.
To unwind I've posted more reviews on Happenny Worth and am just about to finish 'The Bullet Trick' by Louise Welsh, is it better than 'The Cutting Room'? Not sure, but frankly when your books are this good it doesn't matter.
Posted by paulhd at 11:46 pm 3 comments:

After much faf I've revived my 'review' blog. It's called Happenny Worth and the links to the left. The first few reviews will be from my old review blog and Wazzock's Lantern but I'll be sneaking newer stuff in too. Reading it is not obligatory but if you want to agree/disagree please join in so I can tell you why I'M right and YOU'RE wrong!
Posted by paulhd at 10:08 pm 13 comments:

We move house next week!

Picked up the keys yesterday after a lengthy but straightforward buying process. The sellers dawdled signing papers and agreeing times, we only found out we could get the keys on the 21st late on the 20th.
It'll be a rushed move but we're pretty handy at moving after wandering from house to house over the last 10 years.
A quick look around the place last night turned into a drama as the last people in (house sitter I think) decided to set the alarm and no one thought to tell us the code or how to use the thing. Half an hour of shrill ringing before we found someone who knew someone who knew the people who knew the code.
Once our ears stopped ringing and we were able to look past the left behind tat, dust, cobwebs and green stained sink with a beer can in it, it was nice to be looking at our first home.
It's not fancy but it's big enough to fit us all in, it's practically detached (the bedroom at the back is the only part of the place connected to next door) and is quite private, which is great for me as I like a house less like a castle and more like a cave away from civilization. For people on our measly wage we seem to have been really lucky.
And anyway, we've bought our first HOUSE!!! YAY!!!
Posted by paulhd at 2:13 pm 5 comments:

And so they should! 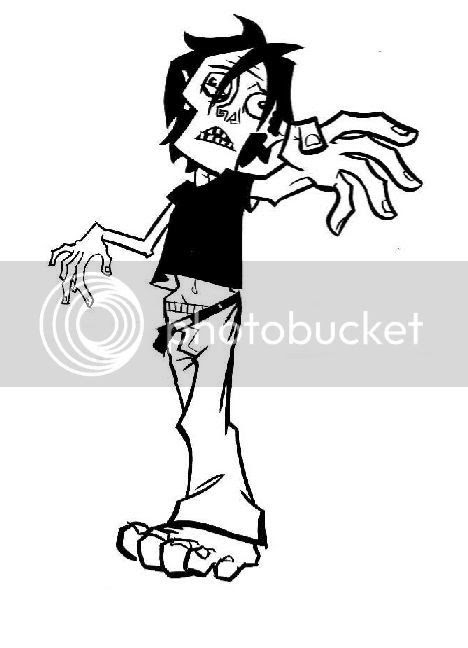 Check out Zombie Dollars for some seriously tasty flesh, uh, I mean artwork.
Posted by paulhd at 11:37 pm 12 comments:

Superman Returns. Not really a review.

Oh gosh. Superman Returns, Brilliant. Ok, it's not quite as good as Superman The Movie, but it is utterly fantastic and oh so close.
Don't want to spoil it for anyone who hasn't seen it yet so I'm not going to say much about it. There's some beautiful moments, as expected from Bryan Singer, some brilliantly tense moments and some jaw dropping moments. Brandon Routh really does honour Superman, Clark and Christopher Reeve, Spacey is a crueler but recognisable Lex with everyone else doing a bang up job in their roles (I did find myself wishing Kate Bosworth would channel Margot Kidder but that probably wouldn't quite work for the film so what the heck), Parker Posey and James Marsden bringing a lot to roles that could've gotten lost.
If it has one flaw it's that it works so hard to successfully achieve the balancing act of introducing Superman to a new audience and respectfully following the Donner film (and there are so many wonderful riffs on that film, minor and major)) that it's not quite able to cut free. Funnily enough Singer's excellent X-Men film had a similar flaw, so much work was spent setting it all up that it was the 2nd film that took all the glory. Which is why as much as I absolutely loved Superman Returns I think the next one (please be another!) will be phenomenal.
Posted by paulhd at 11:21 pm 1 comment:

Felt Olivia moving around for the first time! Couldn't tear myself away, Rebecca kicked me off after getting sick of my head on her belly.
Posted by paulhd at 11:17 pm 5 comments:

Back from Nottingham, and I have the bruises to prove it. Paintballing bruises, those buggers sting!
Paintballs was as embarressing and dumb as you'd expect with the coaches looking exactly like the kind of social misfits you'd imagine them to be. It was also a lot of fun. And I was pretty bad at it. Thankfully there was a few games which just involved shooting anyone and ignoring the fact you were getting shot at, which is how I ended up with the kind of bruises I used to get when I fenced (little circular welts with red and purple halos)
Managed to remain upright throughout the night (I'm not a big drinker), but had enough to temporarily convince me I could dance (I can't), and all in all had a jolly good weekend.
Posted by paulhd at 10:16 pm 7 comments:

With his band of men

Going to Nottingham tomorrow evening for the first for the first time in a year. Should be fun, paintballing curry and drink (not all at once, that'd be messy) - if it sounds like a boys day out then that's because it's a friends stag do.
Didn't get much work done this week, it's just been too hot (we've not had the storms yet) for me and I haven't been able to concentrate, typical Brit. I've felt sweaty and grubby all week and I'm uncharitably wishing Autumn would get a move on.
By way of a diversion (always with the diversions!) I've decided to resurrect my book (except it won't just be books, more like anything I've read or seen) review blog and have been hunting down all my old reviews as well as catching up on the new ones. It's not really about reviewing, I just like having a record of what I've read and watched, it makes me evaluate them properly, something I don't do when I first take them in (I don't mind this, I enjoying taking stuff in without thinking to hard about it), and as I don't want to keep everything I buy anymore it makes it a little easier to let them go after I've spouted of about them.
Posted by paulhd at 9:52 pm 4 comments: