Readjusted the previous artwork post, the images should fit a little better and still be big enough to see properly.
The picture below introduces the villains of the piece. No more Simian artwork to scan now. 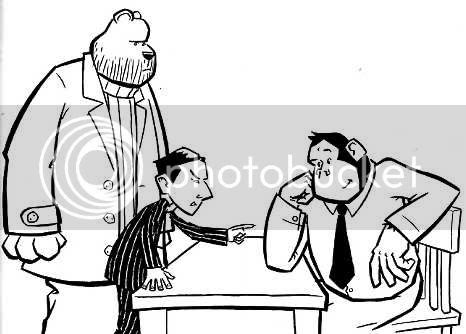 Danny asked earlier where I'm up to with Simian so here's the update. The new final draft is all complete, it's shorter and tighter than the previous one but other than that there's nothing new about it, I haven't added any scenes or characters or taken any out, this was pretty tricky in places but it's always rewarding, hopefully it now reads smoother and is better paced.
Artwise I want to do another spot illo (all the ones shown are from chapter 1 BTW, apart from Simian jumping from his office, that's the start of Chapter 2 but I really wanted to draw it!) and a mock up of the cover. Don't know if it'll seem presumptuous to do a cover, it's just meant to be enticing. At the moment I haven't got a clue what to do for the cover, so I might end up not bothering including it with the manuscript.
And that's it.

YEEEESSSSSS! The finest show Channel Four buried (not including OZ) is finally getting released on DVD. All hail Garth Marenghi's Darkplace!
Posted by paulhd at 7:07 pm 1 comment:

Only going to do a couple more pictures to chuck in with my manuscript. Might actually get it done by the end of the week after all!
This fellow is Lionel Cetera, fish fan. 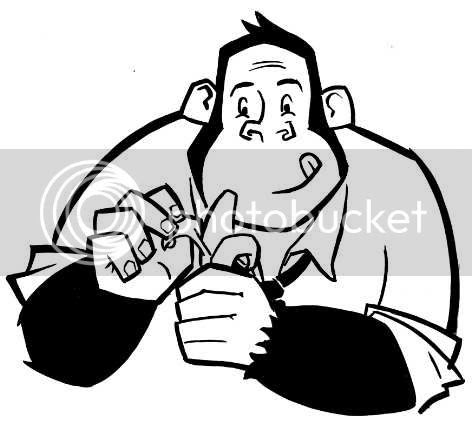 Here's a reminder of an older pic for those who've forgotten, or not seen it before 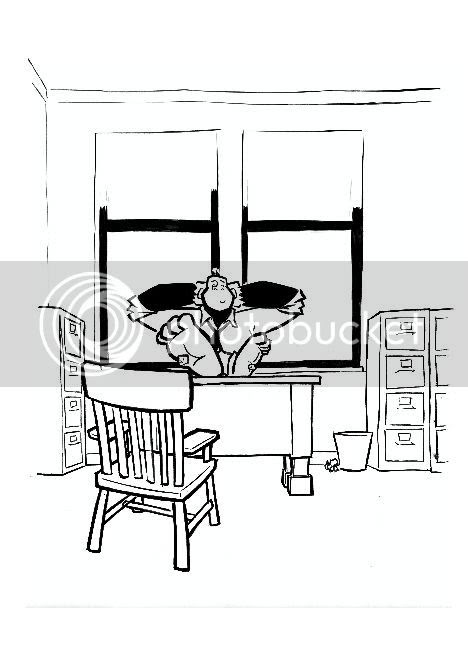 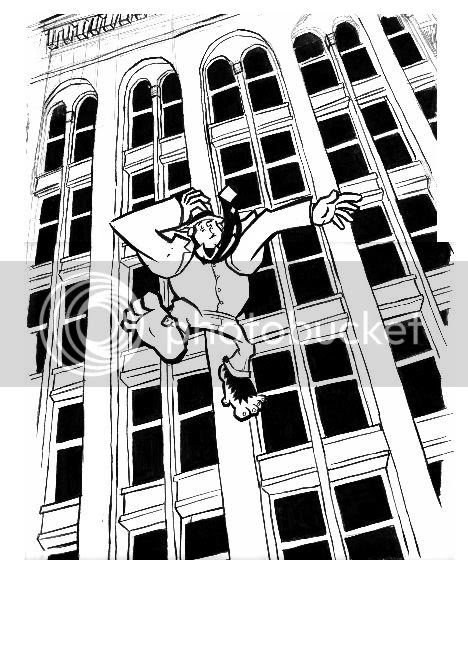 Oh, friends trade blows over Doctor Who shocker! Ok, I exaggerate but as Sam nearly never reads my blog I can do that and not get caught. The controversy is this, I reckon 'Life on Mars' is the equal of the new 'Doctor Who'. Sam is a massive Who fan and has trouble with this even though he rate LOM very highly. Anyone else go any thoughts?
Back when I first wnet online I signed up for all sorts of newletter stuff I never look at now, but an email from Universal caught my eye. The have a new site called BrilliantButCancelled, which is probably not much use to my nonbroadband connection. Not sure what I think about that. There's been far too many shows that've fitted that bill and it's brilliant that DVD popularity has allowed some of them a better chance (Firefly's been an obvious winner, but so has the excellent Wonderfalls (thanks for the heads up Danny)), but it's bittersweet to watch something that was never allowed to grow. Still, nice to be able to see this stuff.
Had hoped to have some Simian Smith artwork done to post but haven't managed it and as family are visiting to look at my wife's belly it'll probably be a couple of days before I do. Best hurry up though as I'm planning to send Simian off to some publishers in a week or so.
Posted by paulhd at 10:02 pm 9 comments:

The rest of the cast

This is the mad scientist (I'm hoping that's obvious), I've scanned a little larger in scale to the monster, he comes up to the monster's ears. I also drew his hands pretty badly, ignore that.

Evil assistant, this fella's more a deviation from the classic Universal Frankenstein look, but I needed something more in keeping with my idea for the comic strip. Height wise he comes up to the bottom of the monster's moobs. The blank bit round the neck is due to my not being sure about whether to give him a regular collar or not. Actually I'm not sure about his costume full stop, that's why it took me a while to finish the drawing. 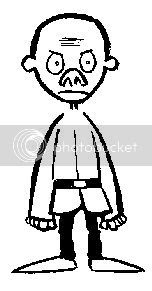 The artwork's brush on watercolour paper, a technique I really like but don't pull of very well myself. Craig Thompson, Andi Watson and Dean Haspiel really make it sing, but I labour the brush lines a little more which tends to loose the textural effect that's the whole point in the first place.
It'll probably be a while before I get round to doing the strips featuring these guys. I've got two scripts but would like to get a few more written before I start posting, consider this a teaser. I've also GOT to finish the Simian Smith artwork this week so I can send off the manuscript. I've part done two new illustrations and want to do a couple more and maybe a cover. Might take me two weeks come to think about it.
Too many things and too little time! 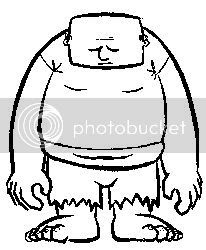 A while back I mentioned I planned to do an ongoing series of one off comics. Well, this guy's one of the cast. There'll be two other people in it, if I told you one was a scientist and the other was his assistant would you be surprised? Thought not.
Anyway, I quite like this big guy.

A couple of months ago I mentioned that

Not what it was meant to be

I had planned on posting some artwork, Danny recently reminded me about a children's book proposal I knocked up a couple of years ago (that long? Oh dear) and I decided to dig it out.
Thinking it's about time I started proving that I do occassionally write and draw I though I'd scan the dug out kid's book, sadly although I'm getting the hang of scanning b&w artwork my colour scanning sucks. Give me a couple of days and I'll sort it out.
In the meantime I figure I'll catch up on comic reviews. Unlike the book reviews these aren't in any order, mainly because I've read so many in the last few months (it's my last big spending spree before all the money gets spent on nappies and the like) and can't remember when I read them.
First up is a couple of books published by the always reliable Fantagraphic.

Buried in archives of this blog lies my fevered musings on the greatness of Richard Sala. And great he is, if you like that sort of thing, and I do. He’s often compared to Edward Gorey and Charles Addams, but he mines his own version of macabre humour. The original title of ‘Mad Night’ (it was first serialised in Sala’s comic ‘Evil Eye') was ‘Reflections in a Glass Scorpion’, a title that screams the influence of Mario Bava. Intricately plotted slasher thrillers are the order of the day here. There’s secret identities, mysterious killers, gruesome deaths, a crazed disregard for logic and plenty of psuedo-psychology, but Sala makes it his own. His artwork for example, an obvious way to draw these kind of tales would be in an EC style, all lushly detailed all the better to appreciate the violence and sexiness, instead Sala works in a quirky, almost woodcut style, with all the dreamlike menace of german expressionism (‘Cabinet of Dr. Caligari’ clearly a major influence) Add a love for bizarre trashy crime and the Sala picture is almost complete.
Mad Night is vintage Sala, it all is, he’s sometimes criticised for doing the same thing over and over again, yet he believes this criticism misses the point, for him it’s an exploration, mining the same influences in a never ending quest to find his perfect story - as he points out, nobody complains that Hitchcock did the same thing.
What I like about Sala is that he takes all these influences and churns then up into something obviously very personal to him. A hard trick to pull off, harder still to make it look so easy.

When a new book by Jason comes out I buy it straightaway, don’t care what it’s about or how much it costs, and I knew that’s how it’d be when I finished his first translated book, ‘Hey Wait’. Like Lewis Trondheim Jason uses a anthropromorpihc characters, but they have more in common than that, they both like to play with the formal elements of comic storytelling, they’re as adept with ‘silent’ comics as they are with ‘talking’ ones and they seem to move effortlessly from humour to pathos.
In ‘Meow Baby’ we get to see more of Jason’s funny side, it’s a collection of short pieces and ranges from belly laughs to wry smiles.
Jason and Trodheim share another trait, they’re prolific. Fantagraphics have released 7 books by him in the last couple of years, ‘Why Are You Doing this?’ and ‘Hey Wait’ are good places to start, but you can pick any of them up.

No posts for a week!? Pretty slack of me.
Actually I have written a few posts, I’ve just not put them up, most are comic reviews which I’ll put up soon. Other are typically whiny and self indulgent and I figure I should try and spread that kind of thing out so I don’t end up looking too... um, whiny and self indulgent.
The heatwave at the moment is very nice, shame my body doesn’t seem to like it, I tend to get headaches and rashes (such a sickly child) before I adapt to such non British weather. Think Rebecca would appreciate more if she could work un the energy to get out and about a bit. A couple of you kind folk have asked about Rebecca so I thought I’d update. She’s not too bad, except for lots of discomfort over the last couple of weeks. She pulled a muscle through retching (nice), as apparently it’s easier to pull muscles during pregnancy, and had to have a very boring couch and bed bound week off work. There was a brief respite from that and now she’s having some serious trapped wind discomfort, which is rubbish for Rebecca but quite pleasant for the baby - I can only assume it’s a boy if it’s finding such pleasure in bodily functions.
Oh yeah, I was 34 yesterday.
Posted by paulhd at 2:07 pm 11 comments:

Once I get on that soapbox it's hard to get off

Just had some rubbish news confirmed. Red Route has closed. Some of you probably have no idea who they are, but they’ve been very handy for me, working in a bookshop and trying to get an interesting range of comics was made very easy due to their existance. Last week I tried to contact them a few times to try and order some stuff and got a ‘number does not exist’ type message which gave me cause for concern, looks like it was justified.
Trying to move into book shops is a risky undertaking for comic publishers and distributors (as Pete Pavement of the sadly missed Slab O Concrete will tell you) and it could be that this is what has been Red Route’s downfall. With only a couple of places for bookshops to get a decent range of comics from, it could be that Titan books are the only thing you’ll see in the graphic novel sections, nothing terrible with Titan but a section that only has Batman, Superman, film tie-ins and a few UK reprints is not going to attract that much interest.
As you might’ve picked up from the last post, I’m a bit worried about the lack of variety and quality when it comes to books, films, etc. Sadly (I speak from bitter experience here) it’s easy to blame the places that create and sell these things but the biggest problem is the people who buy them. As customers we get what we deserve, and if that’s a bookshop full of Dan Brown or a cinema full of repetitive Blockbusters then maybe it’s time we started actively supporting quality and dismissing dross.
Posted by paulhd at 6:47 pm 3 comments: