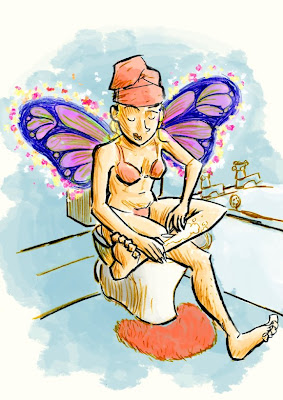 Never managed to get to Caption, the small press comic convention, but I've always wanted to. This year's theme is 'away with the fairies' and in lieu of going to the con I've contributed a pic. Only just sent it, right at the very end of the deadline, so I've no idea if it's gone down well, bnut I'm quite pleased with it.
Posted by paulhd at 10:27 pm 5 comments:

Finally done some drawing! It was definitely a struggle to start with, but Huzzah has a deadline and that helps focus your mind, and I did learn a few things - mainly that I should block in shapes and compose before I start drawing. 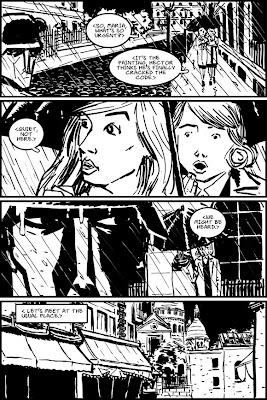 This is for the Huzzahnoir blog, which I hope everyone is following. It's taken a move into slightly different territory recently with a time and location change to WWII Paris, looking at the story so far it seems inevitable and planned, and expands things nicely. I also got a chance to dig through some holiday snaps for reference.
Posted by paulhd at 12:16 pm 2 comments:

No idea if anyone's interested, but I've felt bad about not posting anything lately.
About a month ago my wife had a routine scan as part of her post cancer check ups, and 'something' was spotted. Due to a few bits of nonsense we've had to wait from then until now to find out that it's benign.
Suffice to say, it's been hard to concentrate on anything, and I just couldn't focus on drawing.
But it's all better now, so there'll be a new pic up in at least a week, and I'll feel much better for it. In the meantime my wife and I are going to eat some cake.
Posted by paulhd at 7:27 pm 7 comments: