Anyone who has been reading The DFC, or not, and thinks it's being cancelled too soon might want to go here. Nice to see a bit of fan support similar to that received by shows like Firefly. 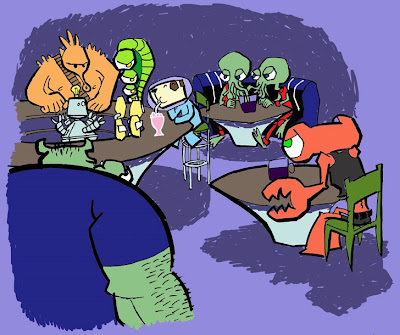 Seems like a good time to show another Astrodog pic. This one was to pad out the three comic pages, and show Astro with aliens, which would have taken several more pages to happen.
Mr Postman delivered a couple of comp copies of the Toxic Comic extra with two strips drawn by me, and they've come out really well. The whole comic looks excellent and I hope there'll be more like it. The issue will be out soon and I'll post some artwork from it then.
Posted by paulhd at 9:52 am 6 comments:

Again with the Huzzah 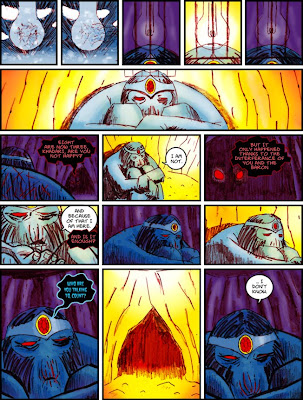 Seems to be a pattern forming to my Huzzah contributions - I've been doing 'inbetween' bits, sort of character stuff, no plot. Nothing wrong with that, I hope, but I should challenge myself a little..
I love how contributors each develop a character based on how we each see them, because we see them from slightly different angles. We all respond to the different facets we each see in the characters, as Rob did with his powerful portrayal of the witchy character recently. I think it's making for some well rounded characters,
This page has been in my head since Ian introduced Khadari, inspired by one of my favourite comics (gets better with each reading), Nexus. One issue featured a back up with the character 'Dave' in prison that has always stuck with me. There's another influence, but I can't say as I'm trying to keep things vague and implied because there's no fun us giving each other a map for the story.
Posted by paulhd at 11:14 am 6 comments:

Thanks to everyone who commented on the last post, it's much appreciated, and cheering, with some helpful ideas about what to do with Astrodog. Once I know where things stand with The DFC I'll start putting something into action. A few people have mentioned Top Shelf, and I'd love to give them a go, but there's other places too, and in a turn of events that really made my day I received a lovely email from a small, but very good, publisher wishing me luck and showing interest in Astrodog. Whatever happens Astrodog won't just roll over, he'll find somewhere.
In the meantime, here's page 2 of the early version. 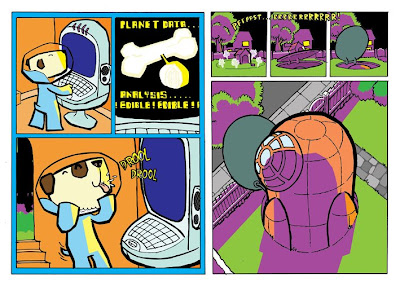 Just seen that Random House has decided to pull the plug, so unless someone decides to buy it The DFC will be no more. The DFC was a wonderful comic, getting in from work on a Friday and seeing it on my table gave me a nice comfortable feeling that I'm really going to miss.
On a personal level this sucks as I had a strip, Astrodog, ready to go with them, it's pretty much fully penciled and I'm incredibly proud of it.
I don't suppose it'd hurt now to post some of the older version of Astrodog. Here's page one from when I'd been asked do do it as a half page comic. I don't usually pimp myself on here, but if anyone likes it and has any ideas who'd be interested in publishing it let me know. 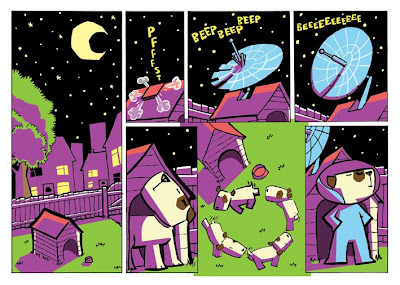