The Return of Hugo 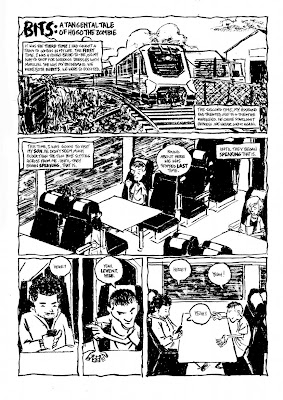 Hugo the zombie, last seen in Zombie of the Great Unwashed, returns in 'Bits'. Sadly, he doesn't return on this page, and I can't really show the other pages because they're a bit spoiler-y, so you'll have to wait:) Or maybe you could just buy a copy of the comic it'll appear in when fine writer Jason Cobley puts it out.
Posted by paulhd at 10:16 pm 2 comments: 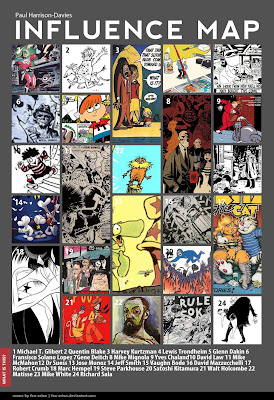 For the sake of honesty I've lied on my map. Brian Bolland and Curt Swan should feature as I spent a lot of time as a kid copying their work. I haven't cared for Bolland since I was about 13, but has his influence has been erased?
There should be a lot more artists, TV shows, films etc. I realised I was equally inspired by 'waves' of creators, so I picked one - Walt Holcombe is an example of this, I could've just as easily picked Goodbye Chunky Rice era Craig Thompson, James Kochalka or Tom Hart. I did the same with British artists, it was a toss up between Paul Neary and Steve Parkhouse. Including McMahon was a given, but that kept out Kevin O'Neill and Ian Gibson.
Herge or Uderzo could've easily gone on the list, but Chaland and Trondheim scratches similar itches for me.
Does Richard Sala look like DavidB? Sort of, maybe, but putting B in seemed superfluous with Sala.
Feels disingenuous to only have David Law on the list, why not Ken Reid, Leo Baxendale or many other great UK kid's comic artist? It's the energy of Law's work that made me pick him.
It's not exactly accurate to put Matisse, or Van Gogh, but Expressionism/Fauvism/Impressionism is something I find interesting and needed to represent some of that.
It was quite hard for me not putting Rumiko Takeashi on the list, and there's not a similar artist on the list, but I left her out as much of her appeal, for me, lies in her writing.
Not having the Los Bros Hernandez, Peter Bagge, Dan Clowes etc seems criminal, but I love their work as a reader, and greatly admire their incredible skill and talent, and that's not the same as being influenced. There's quite a few creators who fall into that category.
Posted by paulhd at 2:29 pm 1 comment: 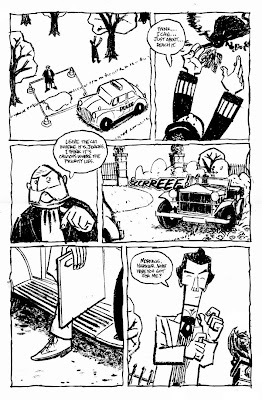 This is the 2nd page of pitch art for Daversham Rex, with Mr Rex actually appearing on it.
Anachronisms are appearing now, with outfits and vehicles from whatever time I like. This is intentional. Honest. As well as using vague likenesses for the cast I decided to pick whatever reference felt right, whether accurate or not. Hopefully it'll achieve an internal consistency.
Posted by paulhd at 8:05 pm No comments: