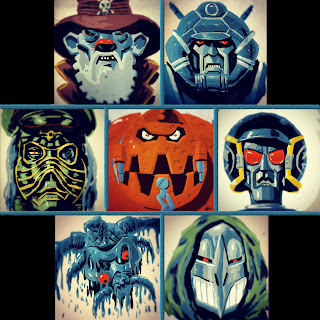 The ABC Warriors are the creation of Pat Mills and Kevin O'Neill, supported by the excellent, Mick McMahon, Brendan McCarthy and many others.I've stuck pretty much to O'Neill's original designs rather than the 'muscular' look of later incarnations as, despite some great work, that's my preference.
These have been put through an Instagram filter, mainly so they come out smaller than the set size Finngr does them which is pretty big.
I've decided to make prints of some of the finger paintings, I've done 4 portraits for this, but I'll not post anything until I've arranged printing as the internet is notoriously fickle and I think a gap between posting and selling would hurt.
I've not sold anything before as I find it hard to gauge interest for the kind of print run these things seem to need. But you have to take the plunge some time.
Posted by paulhd at 2:06 pm 4 comments:

This is the small version of a gif I made to use in a smart notebook resource for teaching children about books from other cultures, in this case 'Journey to the West', for my primary teacher degree. All the drawing took me about 5 or 10 minutes, putting it together took a hours, because I'm an idiot :)
Posted by paulhd at 7:21 pm 2 comments:

Here's a process gif of the Don Siegal finger painting.

It doesn't seem to show up the solid black on my computer, but clicking on the pic seems to work... and will probably make it bigger.

Posted by paulhd at 3:03 pm No comments: 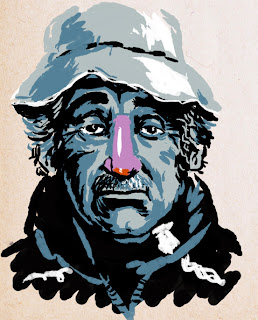 One of my favourite directors, with an impressive list of film to his name, including Riot in Cell Block 11, Invasion of the Body Snatchers, The Killing, Coogan's Bluff, The Beguiled, Dirty Harry, Charley Varrick and Escape From Alcatraz, all on my 'best film' ever list.
No matter what the subject matter Siegel's films were tightly told with a minimum of fuss and flair, yet were far more than just service, the lack of fuss gave them a muscular leanness and the lack of flair was more to do with not getting in the way of  the story rather than lacking in visual style.
Siegel's raw stripped down style, with great silent moments and direct, almost terse at times, dialogue found a great match in Clint Eastwood, who featured in many of Siegel's films.
Because I'm a fan I'm slightly disappointed by not doing a better job at capturing his likeness. In many ways he should be a perfect fit for my slightly Muppet-y cartoony style, but I didn't capture the twinkle in his eye. Still, it's not a bad likeness. 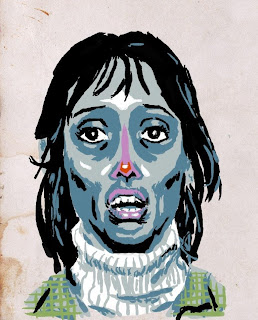 I opted to draw Shelly Duvall rather than Jack, because he get's more  airtime, and persoanlly I think she sells the fear and edginess that makes The Shining work.
I decided to save as many stages as I could remember when I did this one and have a go at making my first Gif - I'm afraid I have no idea why it isn't showing the solid black... anyone else? Hopefully this gives a little insight into how the process works. As you can see I start of with a rough shape and placement and then add and refine from there. As Finngr has no erase function you can see that the only way to correct is to paint over what doesn't work - this is also how I refine bits, by carving away what doesn't work by painting over with whatever the base colour is.
Posted by paulhd at 1:24 pm No comments: