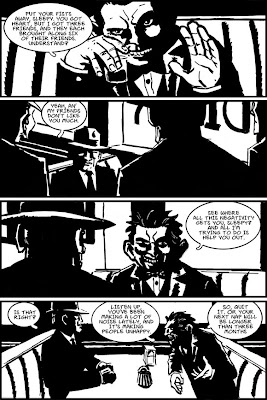 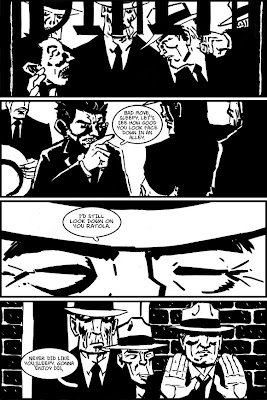 Think I've hit a personal best for speed with my latest contribution to Huzzahnoir. Missed deadline by 15 minutes, but managed 2 pages. It's a little cramped in places to fit in the dialogue and I had to trim some of it, but apart from that I think it's an improvement on the first page I did. Scribbling very rough pencils then using a chunky marker to pick out the key bits is very satisfying, the really trick is learning how to refine those initial pieces without losing what makes them work in the first place.
Posted by paulhd at 12:45 am 3 comments:

I seem to have stopped getting gushy about books that are coming out, but holy f*cking shit, IDW are collection Jack Kent's King Aroo!!! I've tried to hunt down 2nd hand copies of a collection put out 30 years ago in the US, and oddly have had no luck. This is brilliant news, so far I've only seen what was reprinted in an article in The Comics Journal (which was my introduction to Kent), and adored it. Much seems to have been made about the debt to Walt Kelly, which is fair enough, but I think the work stands on it's own. Well done IDW, who are also collecting Torpedo and Rocketeer, making them very lovely indeed. Now, if they'd only discover, and collect Flook.
Posted by paulhd at 6:01 pm 1 comment: 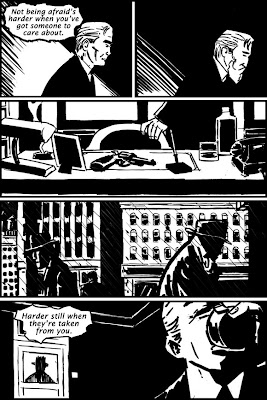 There's a new Huzzah in town, this one's Huzzahnoir, and I think the title's a fair clue to the subject matter.
Crime is one of my favourite genres (the other is horror), and I lean towards the hard boiled crime of Hammett and Chandler (although my favourite crime writer is Jim Thompson), although there's plenty of later authors I like very much, Ross Macdonald springs to mind, and Richard (Donald E. Westlake) Stark. And I've mentioned a fair bit of the Hard Case Crime line in this blog before.
Anyway, Huzzahnoir is right up the lonely street that this man must walk.
I wanted something that combined loose brush solid black inky areas with lines picking out and implying detail.
Here's the rough sketches of three of the plates, as usual I prefer them to the finished art, sadly they were too rough to use. 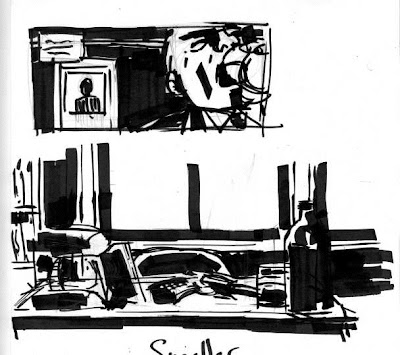 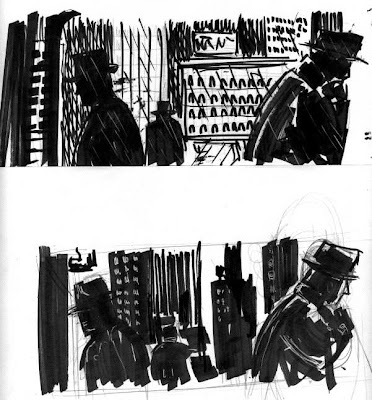 Been a while since I did anything for Huzzah, partly because of busy, a little drawer's block, and a fair bit of being at work and missing a chance at putting my name down for the next bit.
Huzzah's had a new start of sorts and it's such a strong one that when I saw I had the chance of going next I jumped at it, despite not having a clue what I was going to do. As soon as I commented 'huzzah' to take my turn an idea came to me with the images popped into my head straight after and requiring very little redrawing and refining. It didn't end up being the action packed scene I promised myself, but I have learned that if you get an idea you like then it's best to go for it. 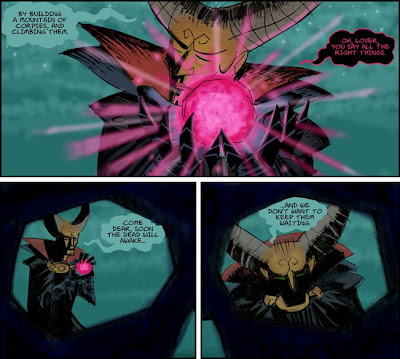 Here's the rough inks I drew the final version from, there's very little changes from this to the finished pencils, but I like to know where everything's at before the final stage. Most people leave a lot out for the final stage to keep things from looking too stiff and overworked. Frankly, I'm not that good and I need to know it works before commiting to finished pencils, or inks. I'm sure it'd drive some people insane and it does mean extra work, but it helps me refine certain details, I find that bits get simplified, and I start 'pushing' the proportions of things and discovering shapes and interesting lines and patterns. Those happy accidents keep it interesting, and without them I think my work can look a bit bland... at least that's how I justify it all to myself. 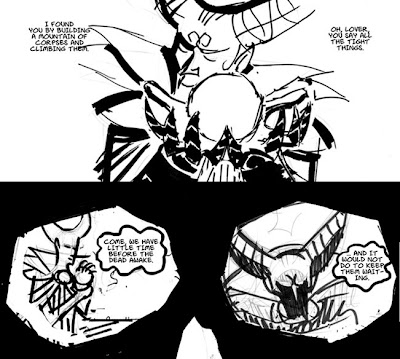 Here's a scrapped version of the first plate, it's a bit too obvious and cliched. All it suggests is menace, mystery and an attempt at looking cool. Big deal. Then I scribbled a bit of dialogue based on the relationship suggest by Colin's wonderful previous plate and I knew there should be real affection shown between the two characters. This turned out well for two reasons - when sinster folks show love it can seem all the more unsettling, and it gave me the idea of having the globe be a bit more glowing with the light coming through the fingers to suggest a feeling of emotion coming from it. The other change from initial idea was that the bottom plate was not divided into two panels, the second eye socket simply had the second bit of dialogue and a bit of background. It just didn't balance right, so I decided the second socket could be another panel, which was lucky because I think the Munoz-esque shadow looks quite nifty and gives the dialogue more weight. 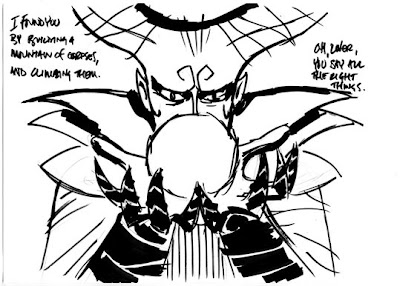 Today is the day that Toxic went on the shelves in newsagents and supermarkets throughout the land. I've got two strips in it, Bad Robots and The Hoaxers. Toxic are taking votes on the various strips and the one with the most votes is in with a chance of a regular gig..... you can see where I'm going with this can't you:) Anyone who wants to check Toxic out and vote here should absolutely vote for their favourite strip, hopefully you'll think that's one of mine:)
Here's the cover and a peak at my two strips. You get to vote here. 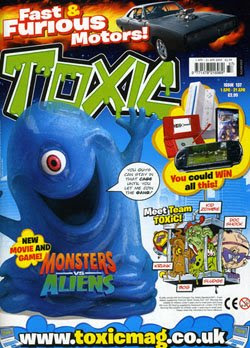 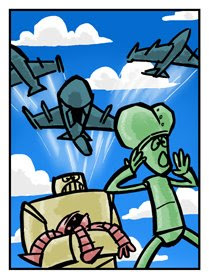