SO, if you've been visiting for a while and have a long enough memory, you may remember the trials of a comic I came up with called Astrodog. If not, don't worry, I plan on bring him back. Astrodog was lined up to appear in The DFC, which sadly folded. By the time The Phoenix was launched there was apparently no place for Astrodog, and I must admit I felt like his time had passed. But I've always had a soft spot for him.
After digging out the work I'd done I decided to expand the (slight) storyline (still slight!) and have about 30 pages of pencils. The plan is to pootle away for a few more months on it and knuckle down in my Summer holidays. It'll be in a landscape format for computers and tablets and maybe about 40-odd pages long.
Here's the redesign roughs 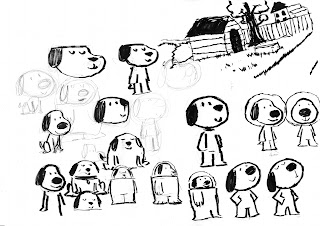 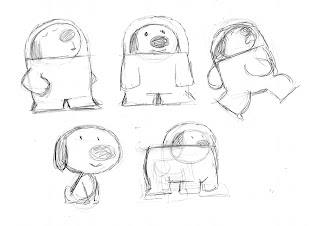 And some colour tests. 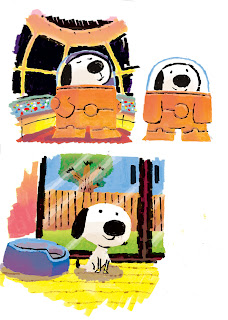 I'm still of the mind that this colour style is the way to go, but that it might be a bit too fiddly. Hopefully I'll get it right when it comes to the final art.
In the meantime I also plan to resurrect a few old ideas. There may be more posts like this.
Posted by paulhd at 7:31 pm 2 comments: 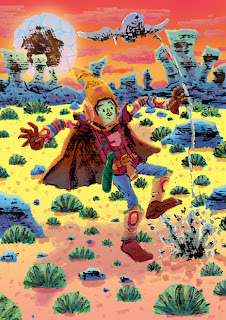 Moebius died recently, and it's no exaggeration to say the world of comics lost a giant. This pic might seem a little less than referential, but I like to think that Moebius had a sense of humour, and comics like 'Is Man Good?' seem to prove that.
So, this is meant to be how Arzach met his flying bird. Dodging it's poo.
I've been asked a few times about how I draw, so here's a bonus process bit for anyone interested.
This is the pencils, all straightforward. 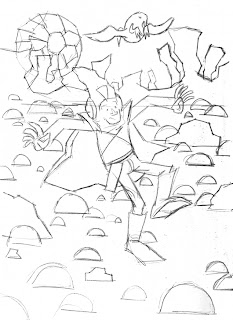 Except these have been flipped, as I actually draw them mirror image on the other side of the paper. This was in preparation for the next stage. 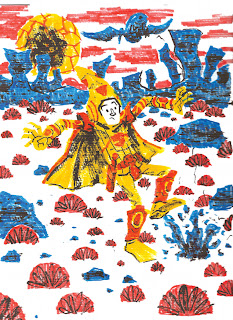 Next I ink (brush and black ink) the lines I think I'll need with the paper right way round on a lightbox, and colour areas with an eye to picking the areas I think need to be clearly delineated. Colour choice isn't really important here, but primary ones make the photoshop stage easier, and there's aspects I like that I think get lost in the final stage, so I need to work on that.
Finally, I scan and work on it in photoshop. To colour I make separate layer for each colour and one for the black linework - which is set to multiply. Because I want the texture of the watercolour paper to show through the colour isn't flat, so I do an 'undercoat' of flats where I make the colour choices, then I select areas in the other layers and alter to (almost) those colours. After that I filter another colour over it - I don't do this on the art that still has line work, but it seems to work here. For now. I might drop it, or at least tone it down.
Then it's my usual method of creating another layer (set for multiply) to add tones. This is done with a colour rather than black as don't like the greys it creates, and a colour choice on multiply creates more interesting tones.
And unless I decide to put a layer of one colour with reduced transparency over the top to unify colours (I didn't here) that's it. And it's actually not as long winded as it sounds!
Posted by paulhd at 10:14 pm 2 comments:

Battle of The Planets 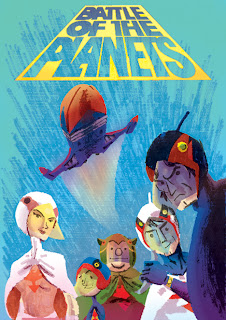 People of a certain age will be familiar with Battle of the Planets, with it's soaring theme tune, cool outfits, a ship that turns into flames and massive robots, it was pretty awesome.
This is another colour experiment, but I spent a bit more time on the drawing, breaking out my black ink and brush for the line work rather than using a marker. Flat colours were done with brush pen before scanning but I'll probably be using brush and ink/watercolour for 'proper' work. The p/shop colouring is still a little fussy at the moment, but it's getting there. I'm going to continue practicing this style with more pics based on whatever takes my fancy, but it's probably time I used it on the next comic I have lined up.
Posted by paulhd at 2:02 pm 2 comments: 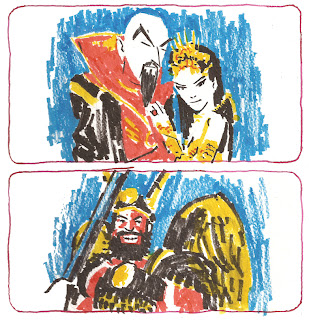 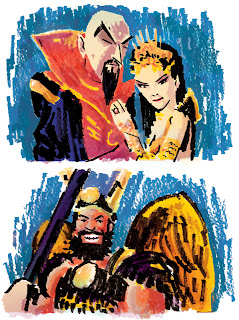 I do love the Flash Gordon film. Here's Ming, Aura and Vultan. I've posted the original drawing and the (more) colour version.
This one came a lot easier from just using black, primary colours and leaving more white space, and I actually like the paper version - which is good, as I like it too look finished in it's own right. In fact, I'm not sure which version I think works best!
Posted by paulhd at 7:47 pm 3 comments:

Didn't spend a lot of time on the basic drawing here, it's all about trying out the colour technique. 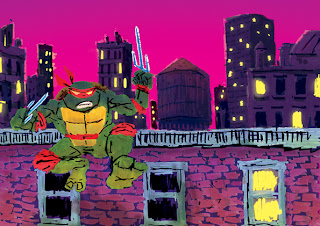 So far what I'm realising is that I need to either make all the colour choices on the paper stage so I don't have to alter them when scanned. Or I use only primary colours on paper, making it easier to separate the various elements and alter them all.
I also think I've dropped too much line work - although a lot of that was from using rubbish markers on crappy paper so I couldn't do my usual style of line work.
Posted by paulhd at 9:54 pm No comments: 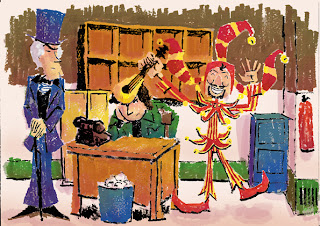 This is an experiment in a new drawing technique for me. I've removed line work digitally before, but now I'm not draw those lines in the first place. Doing most of it in the hand-drawn stages is slightly more awkward than doing it digitally, but I like pencils, brushes, pens and paper.
Apart from mastering the technique, it also seems to have an effect on what colour choices work. One thing I'm noticing is that a very simple palette might work best, almost like as spot colouring. That's not quite what I have here as it's an early step. So early, I may not stick with this style!
Posted by paulhd at 1:17 am No comments: 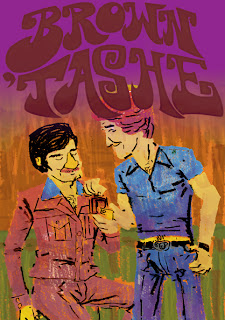 Drunken conversation leads to fabricated 70's aftershave, and way of life, Brown 'Tash. Yes, I know it should be 'Tache. But I liked the 'S'.
Very quick sketch where I've started experimenting with blocking in areas with colour rather than outlines. Need to practice this more I think, but plan to keep plugging away with this style - although without the grubby 70s style colours.
Posted by paulhd at 11:01 pm No comments: