Here's my version of Dandy classic character Desperate Dan (the bull's a nod of the hat to 'Bully for Bugs'), created by the brilliant Dudley D. Watkins, and presently featuring the wonderful work of Jamie Smart. 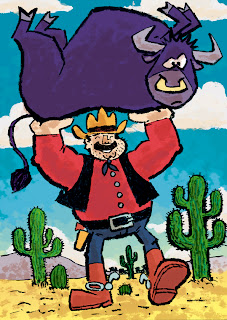 UK comic institution 'The Dandy' is at risk of folding due to low sales with it's 75th birthday coming up. I used to get The Dandy delivered and was a regular reader for at least 5 years. To be honest I'm not sure why I read it (my memory seems to think it was picked by my dad, not me), the truth is that the IPC/Fleetway titles appealed more, with only old issues featuring David Law's Corporal Clott, or reprints of Dudley D. Watkins' Desperate Dan providing interest.
The point is that even at the age of the target audience I found The Dandy to be pretty stale.
I started to pick up the odd issue of The Dandy a few years ago for some reason and found it a much changed, and improved title, then it was revamped and became Dandy Extreme. The revamp appears to have been criticised, which is a bit unfair, yes the new look had less comics and more gaming/film content, but the comics in there were still pretty good. Eventually the revamp was revamped into the present incarnation, into comic that absolutely trumps the version of the Dandy I was stuck with for the 70s. I do think much could be done to improve the present Dandy, but it is still a great comic bursting with enthusiasm.
I hope the news of possible cancellation spur people to go out a buy a copy, I think they'll be impressed.
Posted by paulhd at 10:06 am No comments:

Been busy on work I can't really show (not that it's getting published, it's a pitch, so either it'll get picked up and you can see it, or it won't and I'll post it here_, but in the meantime I painted a Wind in the Willows picture for a friend's birthday, and here it is. 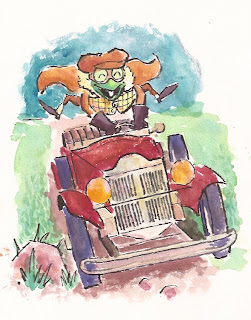 Posted by paulhd at 3:42 pm No comments: