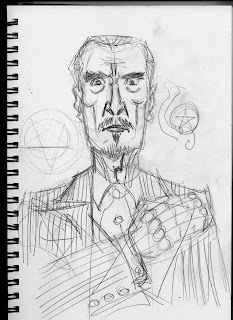 Well, not arrogance maybe, but confident at least.
This was my first go at drawing Christopher Lee, and I think I got it right first time. Wow.
I did a scribble of Clint Eastwood at the same time and utterly failed to capture him (who is that squinty guy with the cigar that doesn't look like Clint Eastwood), so I'll not get too carried away with my ability.
This sketch might give away which Lee character I'm drawing, but it might not, as I decided to take a few liberties. All will be revealed when I post the finished art.....
Posted by paulhd at 9:16 am

I think I know it. It had a crap ending, but it was still good fun. I'll ride it out and see if I'm right.

Can't wait to see the final picture, as it looks like you've captured Lee very well.

Wonderful. Very Duc de Richleau from 'The Devil Rides Out'.

Cheers chaps, of course you're both right, it's Duc de Richleau. My liberty wasn't that distracting then:)
I heard Lee would like to remake Devil Rides Out with himself in the same role, so I aged him.
The ending certainly doesn't match the rest of the film's quality Kelvin, which is a real shame, as it's excellent.

Bang on! That is superb, mate!

As I understand it, they filmed Devil... more or less chronologically, so by the time they got to the end, they're run out of cash, hence the wobbly climax.

Christopher Lee,very cool...thenm he had to go and be crap in the Star Wars Prequels !! Still he was directed by George Lucas so maybe it wasn't his fault !! :)