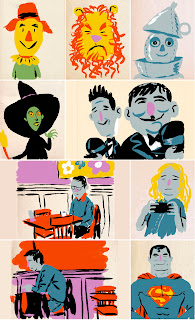 As Bubbles didn't work out I went back to something simpler again, but although The Scarecrow and Tin Man were my own design, I couldn't resist a nod to the film versions of The Wicked Witch of The West and the Cowardly Lion from The Wizard of Oz.
Laurel and Hardy are a bit of a gift for the simple but recognisable thing I was going for, they aren't great, but I'd be surprised if it wasn't obvious who they're meant to be.
The next 3 were done in a coffee shop and so even though they're rough were another attempt at trying to be a bit more considered before applying thumb to screen.
I can't resist drawing SUperman, and he'll always look vaguely 50s-ish when I draw him - see here for proof.
Posted by paulhd at 11:04 pm