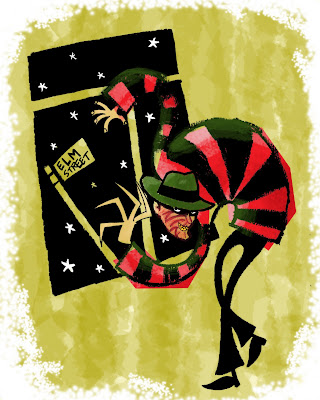 Odd choice of pin up for me as I don't really care for Freddy Krueger, even a gore hound like me is a bit put off by the strange love people had for Krueger, as played up by each film where Robert Englund portrayed him as almost lovable with a quip for every occasion.
On the other hand I did like the inventiveness of the dream sequences, and all this is pretty hindsighty. But really, I did this because I suddenly had an idea for a visual and when I scribbled the twist curving figure I quite liked it.
Oddly the colouring is not how I originally intended, but I figured what the hell, mess around a bit.
Posted by paulhd at 11:04 pm

oh yes, i really like this. i must admit to being a freddy fan, although like all franchise work there was an extreme sense of diminishing returns with the films. anyway, the fairy tale style of this one works a treat, fan or not!

incidentally, how are you doing the colouring? the texture looks pleasingly painterly, but this is always something i struggle with.

Freddy was great in the first film,his make-up much more scary,then the make-up became more of a caricature of that first film and too joky as a film series. Your pic is very cool though,grand stuff again !!

Ooh... I don't know if it was deliberate, but there's a definite Tim Burton feel here, which works really well, given the striped theme. Nicely done.

The only change I'd make is to jazz up the glove a bit, but I'm not sure exactly how I'd go about it.

Cheers folks!
Paul - Not sure how I'm getting on with colouring, I'm just not subjective enough about my stuff, but I am enjoying doing it. Textures are fun to play with, I'm sure the longer use them the less I'll use them, in the hope of being more effective.
Andrew - Yeah, the 1st is the most effective. I think the only thing the later ones have going for them is the sticky looking fx. Mind you that last Wes Craven one was an interesting take.
Kelvin - Tim Burton's not really a influence, but I know what you mean. I'm a big fan of Richard Sala and Edward Gorey and Burton's art owes a lot to Gorey.
Fair point about the glove, probably a touch of red might help, or even if I'd actually drawn it as a glove instead of sharp fingers!

Oh, I don't mean to be negative. The picure's great, so don't worry about the glove; I would do it differently, but I think it's just a matter of style and personal taste.

That's ok, I didn't take it as negative at all, it's totally valid.
I've added some red to the claws and it looks ok, I'll update it later. Might even put up some of the sketches I did, they have more of the Burton look you like.

CAn't say I'm a huge Freddy Krueger fan either but this is ace - kind of animal the way he undulates in this.

Ta Danny. The look is pretty much inspired by shadows and the classic Nosferatu.